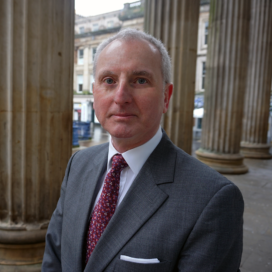 A preview of the plans taking shape in Glasgow for COP26, the key themes set to be covered and the critical role of tech companies in delivering a net zero future.

A year later than originally planned, preparations for the UK to host the 26th annual session of the United Nations Framework Convention on Climate Change (UNFCC) Conference of the Parties – or COP26 – are now in full swing. Expectations and ambitions for the summit have skyrocketed since President Biden re-joined the Paris agreement on his first day in office and subsequently committed to halving US emissions by 2030. While China won’t begin curbing greenhouse gases until 2030, they’re now talking publicly about a climate in crisis.

There have been extraordinary diplomatic efforts by the UK Government throughout lockdown to ensure post-pandemic / post-Brexit Britain is in pole position in the global race to net zero. The UK is the first major economy to enshrine national emissions targets in law, mandate a Taskforce on Climate-Related Disclosures for listed companies from 2023 and extend the City of London’s leadership and expertise in Green Finance. The UK’s latest commitment to slash emissions by 78% by 2035, incorporating international aviation and shipping quotas for the first time, is momentous and audacious. Under the UK COP Presidency, combined pledges from advanced nations have risen from 30% to 70% of the 2050 Paris accord targets. This creates more time and space at COP26 to explore the technologies, infrastructure, expertise and innovation investments needed to achieve the individual emissions quotas.

Heads of state will still have their blether in the Blue Zone while the business leaders, activists and experts gallivant around the Green Zone, but the five core themes for the summit are:

Adaptation and resilience – help communities adapt to, and prepare for, the worst impacts of climate change

Energy transitions – accelerate the adoption of cheaper renewables and storage

Finance – encourage our financial systems to be cleaner, to unlock growth and create green jobs

With this agenda, Glasgow (Glaschu – ‘Dear Green Place’) is an inspired choice to host the 200 heads of state and the 30,000 conference delegates. The city’s reputation as a centre for innovation and engineering excellence was forged in the industrial revolution. The term ‘Clyde Built’ became synonymous with the locomotives and steam powered ships that were exported across the world as the cutting-edge technologies of their time. Today ‘Clyde Built’ is more often a nod to the constellations of satellites Glasgow has orbiting in space or the tidal energy array systems and offshore wind power platforms it has pioneered. These CleanTech and ClimateTech companies, which are based in and around the city’s £500 million innovation district, are delivering net zero goals at breakthrough price and performance points. The new Scottish National Investment Bank has started building a £2 billion net zero innovation portfolio in partnership with the private sector. Access to the bank’s patient capital along with initiatives like the £100 million green jobs fund are seen as key to financing the innovation and closing the digital skills gap that will drive Scotland’s transition to net zero by 2045.

Scotland’s wider tech community is flourishing too, most visibly evidenced by our universities producing more than half of all of the UK’s data scientists at Masters level. Easy access to this high value talent pipeline has encouraged Barclays and JP Morgan to invest almost £1 billion in building new campuses in the heart of Glasgow. Clusters of global leadership and expertise have also emerged in personalised medicine, nanotechnology and efforts to commercialise quantum computing. The Data Lab – Scotland’s Innovation Centre for data and AI, and CENSIS – Scotland’s Innovation Centre for sensing, imaging and Internet of Things (IoT), have established powerful pathways for Private and Public partnerships aimed at exploiting new foundation technologies and techniques.

Turning global emissions targets into useful climate action will involve mobilising and engaging citizens on a sub-national net zero agenda. We need to help people identify and pursue their place in creating the net zero economy, and where we live and work has huge role in this. Sixty of our largest cities account for half of all UK emissions. Glasgow has also joined the race to become the UK’s first carbon neutral city by 2030. It has partnered with the ScottishPower Zero Carbon Communities initiative to create a detailed roadmap that sets out the scale of some of the challenges and opportunities for citizens in reaching the city’s net zero targets.

Technology Leaders and Tech Scotland Advocates are leading a partner initiative with Sainsbury’s plc, LGBT Youth Scotland and Glasgow Science Centre to broadcast a programme of interactive events and experiences for a global audience from the Green Zone during COP26 (1st through 12th November). The programme, co-designed and co-presented by LGBT young people from rural, suburban and city communities, will showcase up to 12 of the UK’s leading net zero solution companies involved in the energy transition, new materials and electric vehicles. We will explore the science, business models and the role diversity has played in bringing their innovations to market and highlight the alternative learning pathways and skills people will need for a future career in tech.

Glasgow is all set to be great hosts as well as a great example for COP26 delegates on their exciting race to net zero.